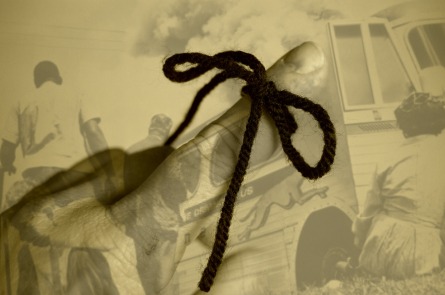 Those who were hurt remember – too often the world forgets. – African proverb

Mass media just got word of a 17 year old boy who was hanged in a small North Carolina town a few months ago. About 2 years ago, a large southern university stumbled upon an abandoned mass grave filled with the bones of slaves who helped build the university and serve its students and staff..

We can’t change history, we can’t undo injustice and damage, but we can certainly do one thing – we can stop remembering to forget.

Lynching was, besides a means of execution, also a way to evoke fear. The display of a dead, motionless body swinging in the wind was a symbol of power. The powerless (those subject to lynching) were meant to be indefinitely afraid of the powerful (the ones that tied and tightened the noose). In most high school social studies classes, the story goes a little something like this: lynching used to be a thing in the slavery and Jim Crow eras, but then came the civil rights movement and in effect, subsequent legislation and lo and behold, all lynching seized.

And what happens when the world gets a whiff of reality – that lynching still goes on, in small towns across the nation? What happens to that story?

Just ask Lennon Lacy’s parents. Their 17 year old son was found lynched on a swing set in a trailer park in August in a small North Carolina town where racial tensions are alive and well. But instead of assessing the area’s current racial tensions, run-ins of the recent past (like when Lacy’s neighbor put up a sign that read “Niggers Keep Out” in front of their home a few years ago) and Lacy’s relationship with a white female in relation to Lacy’s death, officials rather rule it a suicide.

“The family’s lawyer, Allen Rogers, believes that the police aren’t ready to deal with the realities of race, and what really could be going on in this case.” (Uwumarogie, Why You Need to Know about Lennon Lacy)

On another note, as a large university was planning to extend its cemetery, it ran across a big surprise. After clearing through mounds of dirt and trash, a burial ground was uncovered underneath. There were over 60 enslaved men, women and children abandoned and tossed to the side, much like the trash that covered their graves in the first place.

At some point somewhere along the line, someone or a group of someones made a conscious decision to desert the slave burial grounds.

When some universities attempt to sugar coat the institution of slavery on their campuses – highlighting the opportunities for freedom that were available to some slaves, or how they were so beloved in the community or how said official gave his slaves special privileges – what happens when too many skeletons build up in the closet? What happens when the skeletons are given a voice? What happens when history rears its big, fat ugly head?

America’s peculiar institution of slavery and the ways of Jim Crow have been replaced by a way of thought just as peculiar – remembering to forget.

The officials involved in the Lacy case rather deem his death a suicide than uncover its dirty truth.  And the dignitaries of the southern university’s past chose to let the legacy of slavery fade into the darkness. We tend to think of forgetting as a passive act – in other words, we don’t think of people forgetting on purpose. However, events of late prove otherwise.

We choose to forget what we don’t want to remember, what we consider undesirable or simply, what we feel doesn’t fit the image we desire to uphold. But when we forget to remember the oppression of the past for the sake of our present consciousness, it all results in a miscarriage of justice for the future. Today, the descendants of those in the lost mass grave have been abruptly disconnected from their own blood and the family and friends of Lennon Lacy know virtually nothing surrounding the death of their son, their brother, their cousin and their friend – who’s been deceased for months now.

Strange fruit hanging…still hanging…. from the tree (or in the Lacy case, the swing set) and the remnants of the peculiar institution of slavery awakening from the dead all have to be dealt with.  You can have all the selective memory you want, and you can choose to ignore history as much as the days are long – but even skeletons buried under 100s of years of dirt, trash, disrespect and disregard will one day awaken.